Ed note. This piece originally appeared in Global Voices from contributor Noon Arabia.  It is condensed from its original version.

Many are likely unaware, thanks to the mainstream media’s lack of coverage, that Yemen has been at war for almost seven months. In fact, it has been 200 days since a Saudi-led coalition started airstrikes on March 26, 2015, to repel the advance of the Houthis (a group affiliated with the Zaidi sect of Shia Islam), and imposed a naval blockade on its main seaports. Many Yemenis, however, would likely disagree about when the war actually started. For some, the war began on September 21, 2014, when the Houthis captured the capital Sanaa.

The latest humanitarian report by the United Nations Office for the Coordination of Humanitarian Affairs (UNOCHA), issued on September 29, 2015, indicates that hundreds of civilian homes and infrastructure, including hospitals and schools, have been destroyed by explosive weapons, and civilians have been driven from their homes, since the conflict began. In the last few months of war, the following figures have been reported:

The report also indicated that there were more recorded civilian deaths and injuries in Yemen due to explosive weapons during the first seven months of 2015 than anywhere else on Earth. The vast majority of these deaths and injuries occurred in populated areas. 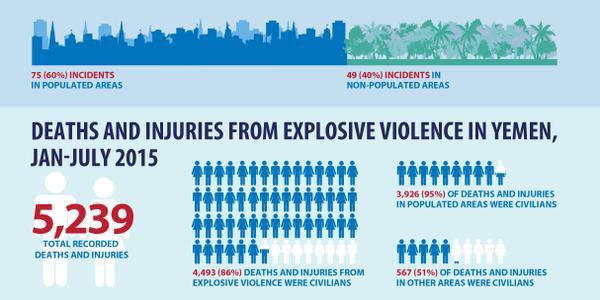 Beside the massive civilian death toll in the past seven months, Yemen’s infrastructure has also been destroyed.

-310 civilian infrastructures were partially or completely destroyed by coalition air strikes and ground fighting throughout Yemen, which include 160 private homes and 150 civilian public infrastructures.
-53 health facilities were damaged or affected.
-96 schools were damaged, while 67 were used by armed groups in 18 affected governorates.
-At least 15 heritage sites, including the United Nations Educational, Scientific and Cultural Organization (UNESCO) World Heritage Site of Old Sana’a and the Seera Castle in Aden were damaged by the armed conflict

The sites were not only damaged by coalition airstrikes, but also by rocket attacks, artillery shelling, and ground fighting by the Houthis. Some sites were also used for military advantage by the Houthis and military units loyal to former Yemeni President Ali Abdullah Saleh, who is fighting on their side.

Yemen depends on food and fuel imports to meet the basic needs of the population. More than 90 percent of Yemen’s food supply is imported. The war and naval blockade imposed by the coalition has exacerbated an already dire humanitarian situation, creating a dramatic shortage in food, fuel, and medicine. The Houthis, on the other hand, have laid siege on the city of Taiz, as they’d done before in Aden, blocking drinking water, food and medicine from reaching the city as reported byMuwatana Organization for Human Rights (Mwatana). The humanitarian crisis is deepening as the war continues, with estimates that as many as 21 million Yemenis—80 percent of the population—are in need of humanitarian assistance.

At the 30th session of the Human Rights Council, a UN draft resolution by the Netherlands asked the OHCHR to dispatch a UN mission to report on the human rights situation in Yemen, trying to establish the facts and circumstances surrounding any violations of international law. Saudi Arabia blocked the proposal, however, offering its own resolution, which lacked mechanisms for investigating any violations of international law that a fact-finding mission might uncover.

While this war’s figures and statistics are astounding, there are also, of course, personal tragedies—stories of loss and suffering that go unreported. The war in Yemen is killing people, destroying homes, and more, and it’s also tearing apart the country’s social fabric.

However much longer the war in Yemen lasts, the loss of life and damage to the country have already set the nation back tremendously. These wounds will persist for decades to come, whether the conflict lasts another 20 days or 200.