More and More Children are in School Around the World, But They Are Not Learning Much

Getting kids into school is only half the battle. Making sure they’re learning is also critical.

But according to a new report by the UN Educational, Scientific and Cultural Organization (UNESCO), more than 617 million children and youth globally are “not learning.” That’s three times the population of Brazil, or six out of 10 children worldwide who are not able to read or do basic math with minimum proficiency.

UNESCO and the World Bank are calling it a “learning crisis.”

“The figures are staggering both in terms of the waste of human potential and for the prospects of achieving sustainable development,” Silvia Montoya, Director of the UNESCO Institute of Statistics, said in a press release.

The report presents the first estimates of a key target under Sustainable Development Goal (SDG) 4 since the goals were set in 2015. Goal 4 challenges countries to “ensure inclusive and quality education for all and promote lifelong learning.” Its first target calls for “effective learning outcomes” from quality primary and secondary education.

Unfortunately, UNESCO’s estimates suggest we are far from hitting that target. According to the report, 56 percent of all children will not achieve minimum proficiency levels in reading and math by the time they are of age to finish primary school. Even worse, 61 percent will not be able to hit the minimum standard by the time they should be completing lower secondary school.

To be clear, primary school enrollment in developing countries has shot up to 91 percent over the last few decades. Although about 260 million children around the world still are not enrolled in primary or secondary school, the enrollment gap between rich and poor countries is closing.

“By 2008 the average low-income country was enrolling students in primary school at nearly the same rate as the average high-income country,” the World Bank noted in a new report this week – the first focused exclusively on education since 1978.

“But schooling is not the same as learning,” it said.

In fact, according to UNESCO, two-thirds of the children and adolescents not learning are in school. Here are some stark examples from the World Bank report of what that looks like:

In Kenya, Tanzania and Uganda, grade 3 students were asked to read a sentence like “The name of the dog is Puppy.” Three-quarters of them did not understand what it said.

Three-quarters of grade 3 students in rural India, also could not solve a two-digit subtraction (like 46 – 17). Two grades later, they still couldn’t solve it.

In Brazil, 15-year-old students are improving. But at their current rate, they wouldn’t hit the average math score of rich countries in the OECD for 75 years – or average reading scores for more than 260 years.

“This learning crisis is a moral and economic crisis,” World Bank Group President Jim Yong Kim said in a press release. And it’s seeped in inequality.

Poor sixth-graders in Uruguay, for example, were found to be “not competent” in math at five times the rate of wealthy students. But as Kim said, “the children whom societies fail the most are the ones who are most in need of a good education to succeed in life.”

According to UNESCO, the learning deficit is greatest in sub-Saharan Africa, where more than 85 percent of children are not learning the minimum. That’s with years of steady improvement in enrollment rates, too. 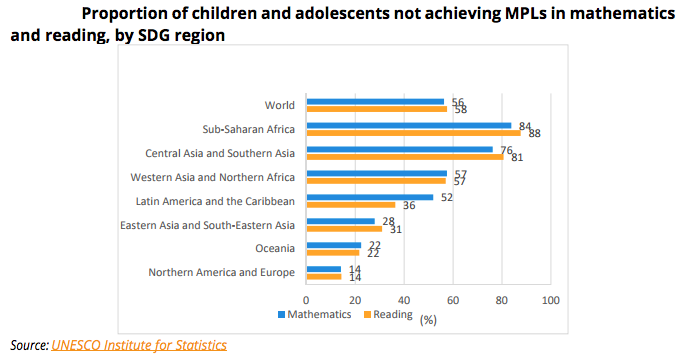 Within sub-Saharan Africa, primary school-age girls are most disadvantaged with 90 percent of them not able to meet minimum proficiency in reading, compared to 85 percent of primary school-age boys. In this case, the gap is largely due to barriers that prevent girls from starting school on time or at all. These barriers include early marriages, a low value placed on girls’ education, expectations for girls to contribute more to household chores and other factors.

In other regions, though, girls are actually more likely to read proficiently than boys, while girls and boys are just as likely to achieve proficiency in basic math on a global level. The UNESCO report suggests that girls “tend to make the most of the opportunity to learn.”

“Education, particularly for girls, is the single most effective investment in sustainable development,” Prime Minister of Norway, Erna Solberg, said recently at an education event at the UN General Assembly. “This is why Norway has doubled its financial support for education over the last four years.”

These findings certainly support continued investment into girls’ education. But even moreso, they serve as a “wake-up call” to policy makers to invest much more into the quality of education, including learning assessments.

The World Bank’s examples of students not learning were shocking, but at least those countries are collecting data on their students’ proficiency levels. According to UNESCO, about 100 countries currently do not even do that.

“The only way to make progress is to ‘find truth from facts,’” World Bank Chief Economist Paul Romer said in press release. “If we let them, the facts about education reveal a painful truth. For too many children, schooling does not mean learning.”

But as countries like Vietnam and Peru have proven in recent years, dramatic improvement is possible with data collection, inclusive efforts and engagement from all stakeholders. It is also critical, if the international community hopes to make progress not only toward SDG4, but all global development goals.