A UN Peacekeeping Unit in South Sudan patrols an area where conflict destroyed thousands of acres of cropland. Credit: UNMISS

A Famine is Never Just a Famine — It’s Political Violence By Starvation.

We are entering an age of famine. But the extreme food crises facing South Sudan, Somalia, Yemen, and Northern Nigeria are not solely a consequence of natural disaster or climate change. Rather, people are starving to death because other people with the power to prevent these deaths are failing to act.

In a joint press conference last month, UN Secretary General Antonio Guterres said that the UN would need $4.4 billion by the end of March in order to tackle all of these crises. That money is not coming — putting some 20 million people at risk of facing famine conditions — but even if the UN had all the money it needed for humanitarian relief, that would not be enough. Political solutions to the current conflicts are what is needed.

In South Sudan, according to World Food Program spokesperson Steve Taravella, some 100,000 people are facing starvation. The country is also the site of the third largest displacement in the world, with almost 2 million people internally displaced and over 1.5 million who fled as refugees.

It is apparent that raising money to combat famine comes with its own set of challenges, especially as international attention and resources are focused elsewhere. This is not helped by the fact that the Trump administration plans to slash voluntary contributions to the UN and cut funding for its own international aid and diplomacy agencies.

Yet this very fact, in itself, points to something that should be obvious but is rarely explicit: a famine is never just a famine. 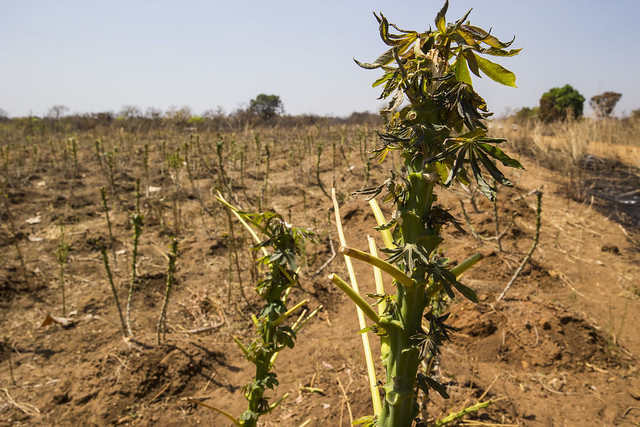 Conflict has destroyed thousands of acres of cropland along the Juba-Yei road, where herders and pastoralists have clashed. Credit: UNMISS

Famines occur because those with the power to prevent or stop them fail to do so. Sometimes it is a lack of political will; other times it is more intentional. The 1983 – 85 famine in Ethiopia, of “Do They Know It’s Christmas” fame, was presented in the Western media essentially as a natural disaster; a drought, and a situation that could be fixed if only enough money could be raised for humanitarian relief. In fact, the drought began after the famine started and in some areas the famine was initially caused by the government’s counter-insurgency maneuvers and forced relocation programs (see pp. 133 & 176 of this book).

Today, in South Sudan, the recently-declared famine is linked to the young country’s civil war, which erupted at the end of 2013. Yasmin Sooka, Chair of the Commission on Human Rights in South Sudan, presented her report to the UN Human Rights Council in Geneva last Tuesday. She said that the situation has deteriorated over the last nine months, and she reported “Whole villages burnt to ashes, attacks on hospitals and churches, bodies dumped in rivers, allegations of young girls held as sexual slaves, women young and old gang raped and boys and men forcibly recruited.”

She explained how the government of South Sudan and its allied militias are targeting civilians and forcibly relocating people in a way that is tantamount to ethnic cleansing, and that hunger – including in places where previously there had been plenty – has been one of the consequences on the ground. This complicates international efforts to respond, as a UN News Centre story on Sooka’s report says: “Relief agencies, including the UN, have little choice to accept the restrictions imposed by South Sudan as they cannot walk away and let millions of people starve.”

At the same time, Sooka reiterated the Human Rights Commission’s recommendation of an independent UN investigation and insisted that the UN be “bold enough to push for the immediate establishment of the [planned] Hybrid Court and prosecutions… The alternative is policy of appeasement – making us complicit in the bloodshed that is happening.”

The bottom line here is that humanitarian crises cannot be separated from their political contexts. As Sadako Ogata, former UN High Commissioner for Refugees, said in 2005, “There are no humanitarian solutions to humanitarian problems.”

Given the pressure on the UN to act in the face of escalation of violent conflict, any UN famine relief response will have to at least consider the political implications of their interventions. But humanitarian aid, even if you have all the funding you need, is always only a stopgap – the real solution to famine is political.