How Countries Responded to COVID-19

Since the start of the COVID-19 pandemic, countries have deployed drastically different responses. According to a new UN report, we’re still in the early phase of this crisis, but so far, South Korea has had the most effective response and the United Kingdom the worst.

The report, published last week by the Sustainable Development Solutions Network, ranks the 37 member countries of the Organisation for Economic Co-operation and Development (OECD) based on how well they’ve been able to contain COVID-19 and also minimize damage to their economies. South Korea topped the list, followed by Baltic countries and countries in the Asia-Pacific region. The U.S. and several western European countries rank on the bottom of the list.

The OECD’s member countries and key partners make up about 80 percent of world trade and investment, according to the group, so their ability  (or not) to mitigate the economic impact of COVID-19 has big global implications. 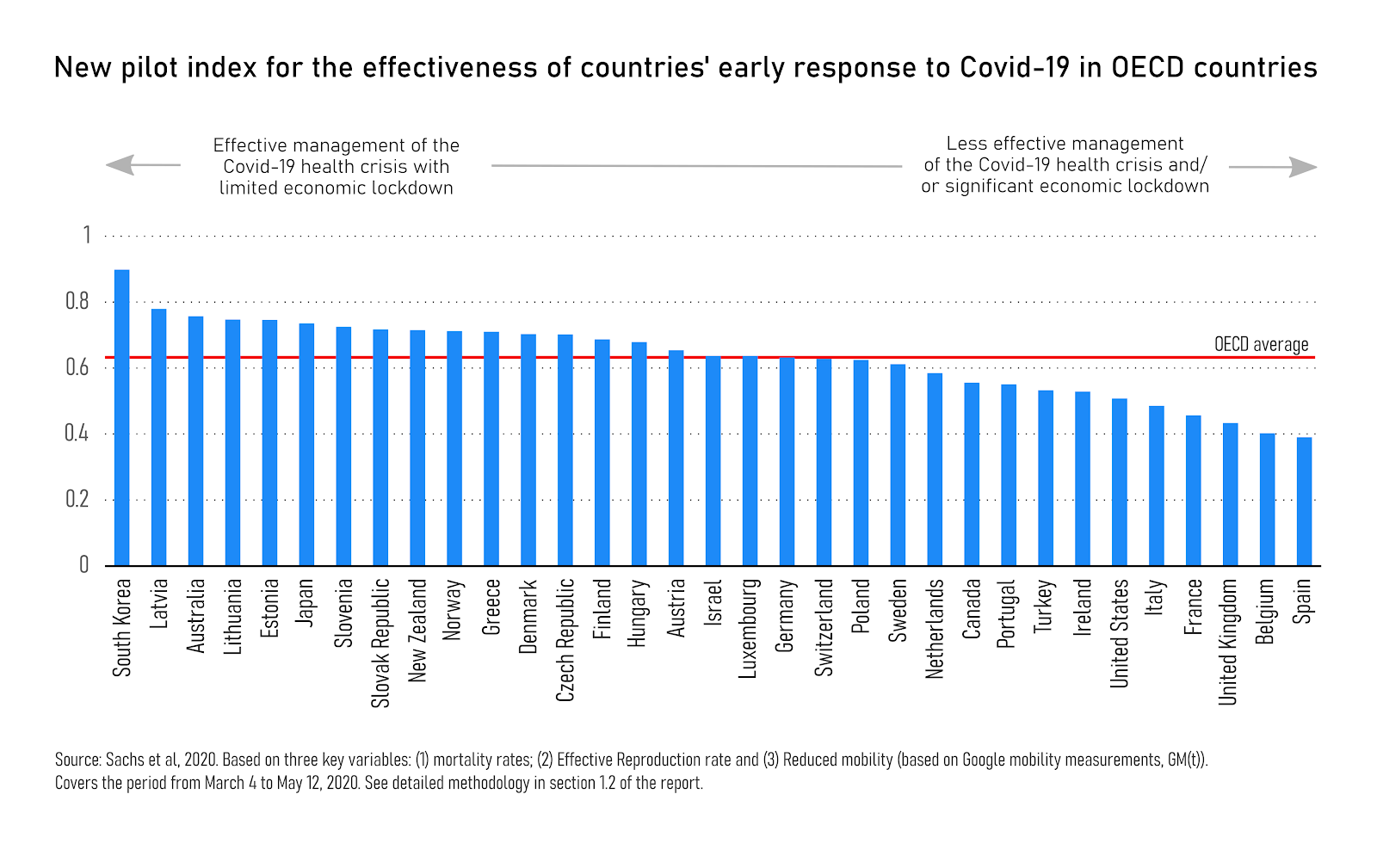 The index also looked at how well countries have suppressed the pandemic during this early phase. Some countries, like South Korea and New Zealand managed to suppress transmission of the virus in March and April. In others, transmission is ongoing, like in the U.S., which has the highest “effective reproduction rate” of the countries analyzed.

Finally, the index assessed the efficiency with which countries have been able to control the pandemic. South Korea, for example, was able to suppress transmission with minimal economic fallout by employing a more targeted strategy, including isolating or quarantining infected individuals, contact tracing, quarantining people exposed to carriers of the virus and wearing face masks. Other countries, like the U.S. and Italy have had to “resort to the cruder and costlier approach of economic lockdowns,” the report’s authors wrote. Although the economic disruption has been “enormous,” they say, strict and prolonged lockdowns on social and economic activities was “most probably the right policy response for countries lacking [personal protective equipment] and with lower testing and hospital intensive care capacities,” and likely saved thousands of lives.

Although countries at the top of the index have performed better than others, the report makes clear that all countries are still highly vulnerable to new outbreaks, because no country has acquired “herd immunity” yet. Just this week, South Korea has reported several consecutive days of more than 60 coronavirus cases.

COVID-19 and the Sustainable Development Goals

The report also notes that COVID-19 will likely have “severe” short-term negative impacts on most of the Sustainable Development Goals (SDGs), especially progress toward no poverty (SDG 1), no hunger (SDG 2), good health and well-being (SDG 3), decent work and economic growth (SDG 8) and reduced inequalities (SDG 10). The only silver lining, though the impact is still unclear, is that the economic lockdowns seem to have been a reprieve on the environment. As economic activity resumes, it’s important that we don’t revert to our “old patterns of environmental degradation,” the report’s authors wrote.

In terms of how well countries are progressing overall toward the SDGs, the report also includes its annual ranking of all 193 UN member states. Since the SDGs were adopted in 2015, East and South Asia as a region has earned the title of most improved, while Venezuela, Zimbabwe and the Democratic Republic of Congo have regressed the most because of conflicts and other economic and social problems. As in previous years, Sweden, Denmark and Finland topped the index, yet even these countries are not on track to achieve all the SDGs. The U.S. ranked 31, behind Italy, Spain and others. Additionally, the report found that high-income countries are severely undermining other countries’ ability to achieve the SDGs because of their trade and consumption practices.

Because of the delay in data, the SDG index doesn’t account for the impact of COVID-19. But according to another UN report published Tuesday, the pandemic is reversing decades of progress:

An estimated 71 million people are expected to be pushed back into extreme poverty this year – the first increase in global poverty since 1998.

Disruptions to health, vaccination and nutrition services means deaths of children under age 5 could increase by hundreds of thousands this year, and maternal mortality could jump by tens of thousands. Global education has also been severely disrupted as school closures have kept 90 percent of students out of classrooms – with that, more than 370 million children have missed out on school meals they depend on. Additionally, as families fall below the extreme poverty line, their vulnerability to exploitation will rise. Child labor, for example, is likely to increase for the first time in 20 years.

However, both reports note that the SDGs offer a framework for recovering from the pandemic in a way that builds back better. Specifically, if countries cooperate with each other and focus on transforming (1) education and skills, (2) health and wellbeing, (3) clean energy and industry, (4) sustainable land use, (5) sustainable cities and (6) digital technologies, they can achieve all 17 SDGs. Achieving the SDGs will, in turn, prepare the world to better respond to future crises, including other pandemics and perhaps the greatest crisis of all – climate change.

Want to learn more about what accounts for different countries’ responses to COVID-19? Listen to this podcast interview with a political scientist who specializes in comparative politics