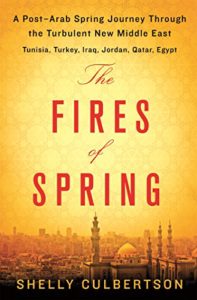 In her new book The Fires of Spring my guest today Shelly Culbertson travels to six countries in the Middle East and North Africa to describe for readers how each of these countries are managing the political, economic and social challenges of the post Arab Spring era. Through interviews and drawing on her own expertise as a longtime analyst, Culbertson explains why some countries in the region managed to muddle through the Arab Spring, some collapsed under pressure, and how at least on may have emerged stronger.

Culbertson has had a career in government and is now with the Rand Corporation, where she specializes in education and development in the Middle East. We discuss her interesting career path and some of the fascinating stories from her book and travels throughout the middle east.

If you are interested in comparative politics and the Middle East, you’ll love this conversation. I certainly learned a lot from her and the book is a great resource.