The Most Innovative Countries in the World, As Ranked By the UN

The United Nations agency that guards intellectual property rights has ranked countries according to how innovative they are.

Switzerland is the most innovative country in the world, according to the latest Global Innovation Index published in July by the UN’s World Intellectual Property Organization (WIPO). But for the first time, Israel has also joined the ranks of the top 10 most innovative countries, while Vietnam and Rwanda are leading their respective income groups

With progress toward the Sustainable Development Goals stalling on several fronts, many experts see innovation and research as a key component to accelerating economic and social development. In fact, the set of goals themselves include innovation as SDG 9: “Build resilient infrastructure, promote inclusive and sustainable industrialization and foster innovation.” This year’s report focused in particular on the near-future of medical innovation and how both technological and non-technological innovations can transform health care around the world.

For the last 12 years, the WIPO has released its annual rankings of countries. This year, the index ranked 129 countries based on 80 indicators, which included measurements like how much countries are investing in research and development, the number of international patent and trademark applications countries have submitted, as well as the value of countries’ high-tech exports and how many downloads their mobile-phone apps are getting.

According to these indicators, Switzerland, Sweden, the United States, the Netherlands and the United Kingdom are leading the world in innovation. And for the last five years at least, the top 10 countries haven’t changed too much – they’ve all been European countries, plus the U.S. and Singapore. However, Israel’s 10th place ranking this year marks the first time a country from the Northern Africa and Western Asia region has cracked the top 10 list. 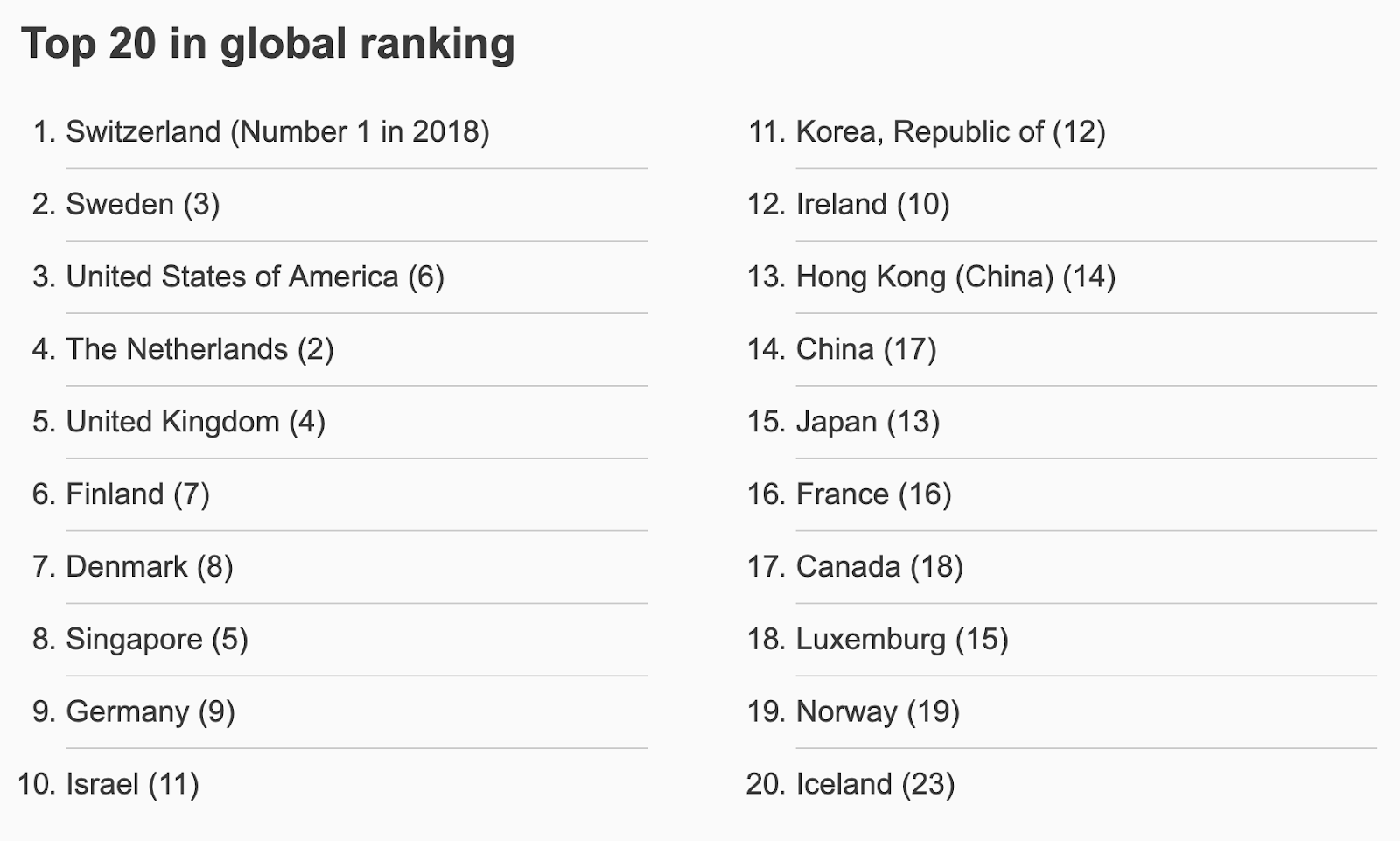 The top 10 countries are also all high-income countries – for good reason. Income-level continues to play a significant role in how much countries can invest into research and development and innovation. However, the report notes that a shift is happening, with several middle-income countries leading the charge toward the top of the charts. Most notably, these include China (14th), India (52nd) and Brazil (66th), the report says.

Because the policies in these countries have prioritized innovation, not only have they seen significant increases in their rankings, but despite a global economic slowdown, innovation continues to “blossom,” especially in Asia.

Several indicators under SDG 9 talk about promoting innovation in developing countries, and the results of this index show that with enough government planning, many countries have been able to exceed expectations given their level of development. Notably, among low-income countries, Burundi (128th), Malawi (118th), Mozambique (119th) and Rwanda (94th) are all innovating more than expected, despite some low global rankings. On the other hand, Saudi Arabia, the United Arab Emirates and Lithuania are among 10 wealthy countries that are underperforming for their development level.

Although innovation seems to be withstanding the effects of global economic uncertainty so far, the report does note that some high-income countries are beginning to slow down their investments in research and development. In addition, trade wars and protectionism are also threatening the diffusion of new technology, ideas and knowledge across borders and around the world. Both of these concerns could jeopardize not just innovation rankings, but could also exacerbate the deceleration of global growth and development.

So what should countries do? In addition to continuing to increase investments in research and development, the report authors say that the rankings provide “valuable insights” into which countries are excelling in innovation and which ones are getting the most out of their investments. Learning from these global leaders can guide innovation policies for other countries. And doing so can accelerate progress toward all the Sustainable Development Goals.