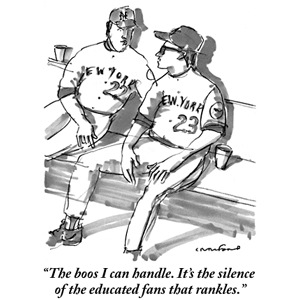 This week, the New Yorker’s Elizabeth Kolbert and MSNBC’s Rachel Maddow (around 3:18) both marked some news that didn’t get much airtime this week — a UK parliamentary panel charged with looking into “Climategate” found that there was no evidence to support the charge that those involved had “misrepresented data” and, moreover, ‘that nothing in the more than 1,000 stolen e-mail messages or in the ensuing controversy challenged the scientific consensus that “global warming is happening and that it is induced by human activity.”‘ Pretty important news, but there’s a fair chance you haven’t heard about it.

Who’s to blame for this mess? Kolbert blames faux experts like the well-named Joe Bastardi and us, for whom this “distraction,” apparently, is what we’re looking for.  Maddow, of course, blames Fox News, but I think she gets a little closer to the truth while discussing public discourse in this country, “Two things disqualify you from this process. You can’t threaten to shoot people, and you have to stop making stuff up.”  What’s really to blame is a simplistic idea: that unbiased news means giving equal coverage to both “sides,” regardless of whether those sides are actually balanced in truth. As Maddow says, “What we’re dealing with here is the unmooring of politics from facts.”

That idea both leads to the pressure, so-called, “left-leaning” media feels to “balance” their coverage and, more subversively, to the feeling among the public that all news should be treated equally.  What we get from that idea is what I’ve heard from many of my friends who don’t follow the issue closely: that there are a group of legitimate skeptics out there. We get “Glaciergate” weighted equally as the entire, 1,000-page IPCC Fourth Assessment Report. And we get “Climategate,” which, as Kolbert points out, ‘is so off base that it is difficult even to respond to: “Insofar as the committee was able to consider accusations of dishonesty against CRU, the committee considers that there is no case to answer.””

*Photo and Cartoon courtesy of the New Yorker.