A poultry operation in Egypt. Good hygiene on farms can help stem the rise of AMR due to over-reliance on antimicrobials. Photo: FAO/Giulio Napolitano

The verdict is in: Humans and climate change are putting the land on which we live under immense and growing pressure. But that same land could be part of the solution.

On Thursday the UN’s Intergovernmental Panel on Climate Change (IPCC) released a comprehensive new report, which looks at how our use of land contributes to climate change and how climate change affects our land.

According to the report – which was the first report the group compiled with a majority of authors (53 percent) from developing countries – human activities are directly affecting more than 70 percent (but likely 69 to 76 percent) of all ice-free land. Our activities – including agriculture, forestry, developing wetlands or burning plant or animal matter – are degrading land, making it less productive and less able to capture carbon from the atmosphere. These activities are also responsible for 23 percent of human greenhouse gas emissions, the report says. (Although, some argue that the human impact is much greater if we consider how the land would otherwise be occupied by its natural ecosystem.)

These greenhouse gas emissions are contributing to climate change, which in turn, is putting added pressures on land. Some regions are facing higher risks to food security, livelihoods, human and ecosystem health, infrastructure and biodiversity. Others are beginning to – and will continue to – face new risks they hadn’t experienced before.

So, what do we do? How do we continue to make productive use of our land to feed humanity and avoid a climate crisis?

Here are four recommendations in the report

According to the report, we should adopt balanced diets that feature more coarse grains, legumes (beans, peas, lentils), nuts, seeds, fruits and vegetables; and less energy-intensive animal products and “discretionary foods” like sugary drinks. This type of diet presents “major opportunities for adaptation to and limiting climate change,” says Debra Roberts, co-chair of one of the IPCC’s working groups, because it requires less land and water and causes fewer greenhouse gas emissions.

On the contrary, red meat, for example, is usually a more inefficient use of land and water. The report cites another study which found that replacing beef with poultry in the US diet could meet the caloric and protein needs of about 120 to 140 million more people.

Although a vegan diet consisting of no animal-source food has the most potential for mitigating greenhouse gas emissions, according to the report, other less-strict diets also have considerable mitigation potential, such as a healthy diet with limited sugar, meat and dairy or a Mediterranean diet that includes moderate amounts of meat but is rich in vegetables.

Not to mention, these types of diets are healthier, the report says. 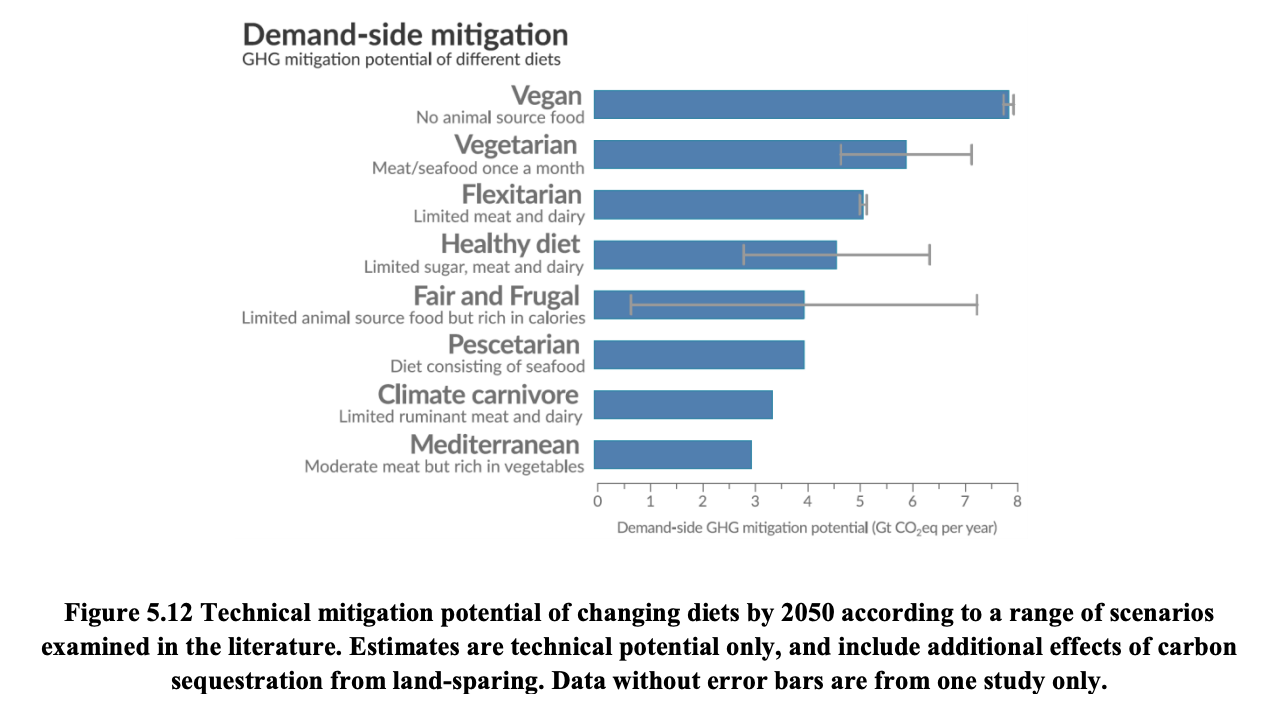 About one-third of food produced in the world is lost or wasted, the report says, and during 2010 to 2016, that loss and waste made up 8 to 10 percent of all greenhouse gas emissions. Not only does decomposing food release methane into the atmosphere, but all the gases that were emitted during the production, transportation and preservation (refrigeration) of uneaten food – and its packaging – are also wasted. According to some researchers, “cutting down on food waste could have nearly the same impact on reducing emissions over the next three decades as onshore wind turbines.”

The report defines food waste as food discarded by consumers. Meanwhile, when the amount of edible food is reduced before it gets to the consumer (during production, postharvest, and processing), that’s loss. This difference is significant, because while a lot of food is wasted in developed countries, food is often lost in developing countries because of poor infrastructure. For example, in 2007, about 20 percent of all food that was produced went to waste in Europe and North America, while about 30 percent was lost in sub-Saharan Africa.

These differences, mean that tackling the problem will vary by region. However, overall, possible solutions include changing behaviors and attitudes toward food waste and loss as well as improving harvesting techniques, on-farm storage, infrastructure and packaging to keep food fresher for longer. Better efforts can also be made to distribute extra food to people in need , converting food waste to animal feed or recycling it into energy.

Although food waste and loss will likely never reach zero, just halving it would reduce the amount of land needed for crops by about 14 percent, according to the report, while greenhouse gas emissions from agriculture would drop by 22 to 28 percent.

Already 500 million people live in areas where fertile land has become a desert because of climate, deforestation or inappropriate agriculture. When land is degraded, it’s bad for people and our environment. It becomes less productive, limits what we can grow, makes us more susceptible to climate shocks (such as droughts, dust storms, heatwaves, floods) and can become dangerous (landslides, for example). It also reduces the amount of carbon that can be captured by soil, which worsens climate change. In turn, climate change degrades land further.

“In a future with more intensive rainfall, the risk of soil erosion on croplands increases,” says Kiyoto Tanabe, co-chair of the IPCC’s Task Force on National Greenhouse Gas Inventories.

“The choices we make about sustainable land management can help reduce and, in some cases, reverse these adverse impacts,” he adds.

One of those choices is planting a variety of crops instead of further degrading soil with just one. A variety also gives communities more options in the face of changing or extreme weather conditions.

Other solutions include conserving, restoring and planting new forests, wetlands, mangroves and peatlands. While forests and soils do not capture carbon indefinitely, the report notes that peatlands (including mires, bogs and other wetlands covered in partially decayed organic matter) can sequester carbon for centuries. Studies have also found that mangrove forests are great at protecting coastlines from erosion and can capture four times more carbon than rainforests can.

The UN’s 17 Sustainable Development Goals were designed to work together, because it has become increasingly clear that no single issue exists in a vacuum. That’s why the report authors say that land solutions are not enough. Instead, “an overall focus on sustainability” is our best chance at tackling climate change and improving food security.

Therefore, it’s just as important to lower population growth, reduce inequalities and poverty, improve nutrition, waste less food, emit fewer greenhouse gases across all sectors and make sure everyone has access to food, even if the land they live on doesn’t produce enough.

And, all this needs to happen now to prevent further damage that will only cost more and be more difficult to reverse. But the authors of the report are optimistic: There’s a lot that can be done, so long as we’re willing to do it now.