What to burn in the developing world?

As I was cleaning out my feeds this morning, I stumbled across this brilliant article on Black Carbon, part of a series on “stopgap measures that could limit global warming.”

Black Carbon, aka “soot,” produced by primitive cooking stoves in the developing world, accounts for up to 20 percent of global warming according to some scientists and represents “low-hanging fruit” — the most possible bang for the buck (in regard to both cost and effort) in confronting climate change.

Not two minutes later, this report popped up on BBC tv (BBC, why no embed?) about researchers at Nottingham University who have discovered a way to make fuel out of banana peels (abundant in many parts of the developing world) and sawdust using no specialized equiptment.  Aside from dramtically reducing the occurrence of comic accidents, burning banana peels could also reduce the use of firewood as fuel, limiting deforestation and, therefore, addressing climate change.

Count me skeptical that, if this is as cheap and easy as the researchers suggest, savvy entrepreneurs in the developing world wouldn’t have already figured it out.  Nonetheless, I like this coverage because it focuses on access to cheap, renewable, and environmentally friendly sources of energy in the developing world, an issue that doesn’t get enough air time and dramatically affects both climate change and the MDGs.  The real answer? I like solar cookers, but that may just be because I’m loathe to disagree with the Boonstra. 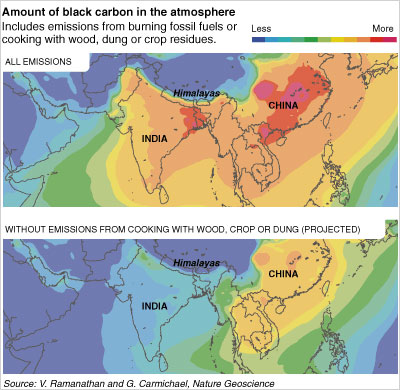